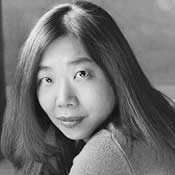 Lan Samantha Chang is the author of All is Forgotten, Nothing is Lost (2010), Inheritance (2004), and Hunger (1998). Her works have also appeared in Ploughshares, The Atlantic, and Best American Short Stories. Chang’s work was nominated for the PEN Center USA West Award and the PEN/Hemingway Literature Prize. She received the Wallace Stegner and Truman Capote fellowships from Stanford, and the Teaching-Writing fellowship and Michener-Copernicus fellowships from the Iowa Writers’ Workshop, as well as fellowships from Princeton University, the Radcliffe Institute for Advanced Study, the Guggenheim Foundation, and the National Endowment for the Arts. Chang has taught at Harvard, Stanford, and Warren Wilson College. In 2005, she became the fifth director of the Iowa Writers’ Workshop.